The first time I had sticky toffee pudding, at one of Gordon Ramsay’s Las Vegas restaurants, it blew me away. The warm, moist cake, the melty-cold ice cream, and the gooey topping come together to form pretty much the perfect dessert.

Last winter, Gustavo experimented with it a lot, determined to re-create that incredible dessert. His final product is actually better than what we ate in Vegas, if you ask me! The cake itself is modified from the New York Times version. (Which, oddly, doesn’t make enough batter for the pan size it calls for.) The topping is my own creation!

Why a sticky toffee pudding variation with rum?

To answer that, let me take you back more than half my life ago, to the first time I ever got tipsy. I was an innocent 16-year-old who had no interest at all in alcohol or drugs. In fact, while at a music and dancing camp over the summer, I turned down plenty of offers of alcohol.

One evening amid the redwoods, though, I realized that the concession stand had rum cake. Genuinely believing that the alcohol would have baked off, I bought a slice and ate it. It was so good that I got two more. (Shush. I was skinny enough back then that eating three slices of cake during summer vacation seemed perfectly reasonable.)

20 minutes later, I found myself staggering to a hidden redwood tree, as far out of sight as I could manage. I plopped down under it and squeezed my eyes shut, trying to force the world to stop spinning.

It turned out that most of the rum in that cake was actually in the sauce that drenched it after it baked. In other words, the cake was full of booze. Three slices of that was plenty given my absolute lack of tolerance. Whoops.

Despite the surprise of sudden intoxication, I loved that rum cake. No version that I’ve had or made since has quite compared. It wasn’t until I added rum to this sticky toffee pudding recipe that I found something that almost lived up to my memories of that first rum cake. 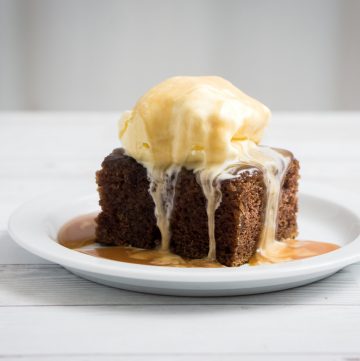