My goal with this potato leek pizza was to capture all the rich deliciousness of potato leek soup, but to transform it into a satisfying and delicious pizza instead. (Gustavo doesn’t like soup… what can I say.) And while I won’t claim this is as faithful an interpretation of “potato leek soup pizza” as possible, it definitely captures the richness and spirit of the soup.

Potatoes: the key to making this (and any other potato pizza) great is to cook the potatoes first. It’s impossible to emphasize this enough. I’ve had the misfortune of eating at a couple restaurants that put raw potato slices onto their pizzas, and it is not an enjoyable experience. Trust me; make the potatoes so tasty that you want to eat them up before they even go on the pizza, and the result will be incredible.

Roast the potato. As I mentioned above, this step is crucial in enjoying a delicious finished product. If you skip this step and just add the potato slices raw, the final pizza won’t be anywhere near as good, because they don’t have enough time to bake while they’re on the pizza.

Cook the leek. This step is pretty straightforward. The goal here is to get the leeks nice and tender. If you like heat, I recommend adding chili flakes to the leeks during this step. It lets the heat incorporate into the overall flavor more naturally than if you just sprinkle them on top at the end.

Second, and importantly, leave two little gaps or “nests” between the toppings. This is where you’ll put your eggs later. If you don’t leave these gaps, your eggs are at risk of not having anywhere to settle and sliding around, even falling off the pizza entirely. (I’ve seen it happen.)

Partially bake the pizza and add the eggs. The key here is to catch the pizza at just the right time. If you add the eggs from the beginning, they’ll be overcooked by the time the pizza is done. If you add them too late, they’ll still be raw by the end. Once you get the hang of it, it’s pretty easy to spot the right moment. The crust will have puffed up around the outside and just started to to develop a golden hue. The mozzarella cubes will generally be maybe halfway melted – definitely gooey around the outside, but still showing that they went on as cubes.

Potatoes on pizza? Really? Yes. Trust me on this one. It sounds weird at first, but these tender, salty, roasted potato slices add an extra dimension of heartiness to your pizza.

Eggs on pizza? Really? Yes. But I won’t fight as hard for these as for the potato slices! I really recommend trying them once, but if the idea is repulsive, go ahead and leave them off. (But the final product won’t be as good!) If you’re not quite sold, think of it this way: the lusciously runny yolk is the perfect rich dipping sauce for the otherwise bland crusts you might leave behind. 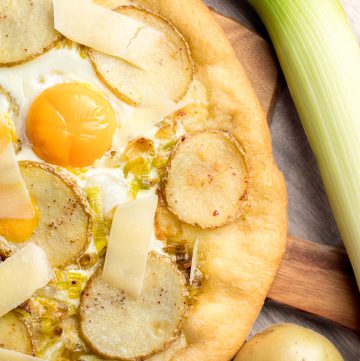 Do you love potato leek soup? Do you love pizza? Get the best of both worlds by combining them! This pizza has all the richness of the soup, with eggs making it even more hearty and delicious.
Print Pin Rate
Prep Time: 10 minutes
Cook Time: 45 minutes
Servings: 1 personal-sized pizza
Calories: 862kcal
Author: Gretchen