In Argentina a couple years ago, I got it through my head that I wanted a nice, spicy, crispy plate of patatas bravas. Unfortunately, nothing we found really scratched the itch; despite being beautifully spicy-looking, most patatas bravas (in Argentina and every country since) weren’t spicy enough to leave me satisfied. To be fair, this was probably an issue with my expectations rather than the potatoes themselves! But still, when you’re lowkey craving a food for months, eventually you need to get your hands on some. That’s why I decided to create these spicy roast potatoes myself.

These potatoes definitely aren’t traditional patatas bravas, but they’re not trying to be. They’re crispy on the outside, tender inside, and spicy enough to have a kick without trying to burn your mouth off. The cumin gives them a nice earthiness and depth of flavor that they wouldn’t get with chili powder alone. And they’re so simple, with just five ingredients, that you can make them in just about any kitchen even if the pantry isn’t very well stocked.

This recipe is part of my 2020 “Quarantine Cooking” series. This typically means simpler recipes than I usually post, often with easier-to-find ingredients. And since we’re in lockdown in an unfamiliar kitchen without our photography equipment and props from home, the pictures may have less variety in style! Thanks for your understanding as we all get through this together.

Spice level: my chili powder is pretty strong and this amount gives the potatoes a noticeable kick without making them blazingly hot, but you may prefer them hotter or have less/more intense powder, so adjust accordingly. If I were just making these potatoes for myself, I would probably double the chili powder, but you know your palate and who you’re cooking for! Leave the amount of cumin powder the same if you reduce the amount of chili powder.. If you increase the chili powder, though, increase the cumin powder too so the flavor can stand up to the heat.

Potato varieties: use pretty starchy potatoes for this recipe. Yukon Golds are ideal, both because of their starch level and because they’re thin-skinned. Anything less starchy than that will end up being more soggy than crispy. To learn more about potato starch levels and how they affect roasted potatoes, check out this amazing post from Serious Eats.

Flavoring: as I mentioned, I kept these super simple. But feel free to play around with other spices! Lots of people like to use garlic powder and/or onion powder on their roasted potatoes. I’m not a huge fan, but you might be, so give it a try! Another option that I love is smoked paprika. Be careful not to use too much, though. Using smoked paprika on anything roasted and crispy brings the risk of creating the illusion of having burned something. Just a pinch is enough to add smoky flavor.

Take Your Spicy Roast Potatoes to the Next Level

This recipe is deliberately super simple and delicious with minimal work and effort. You can definitely take these spicy roasted potatoes to the next level, though, if you want something even more spectacular!

Boiling the potato chunks: for an even crispier exterior, cut the potatoes into larger chunks. Boil them in salted water with a pinch of baking soda until they’re fairly (but not completely) tender. After that, toss them with your olive oil, salt, and spices as directed. Up the olive oil a bit if necessary to make sure all the potatoes are generously coated. From there, continue with the recipe as directed. The cooking time may take longer since the potato chunks are larger, but keep an eye on them and it’ll be fine.

Replacing the olive oil: this recipe as written is “coincidentally vegan,” meaning that’s just how the recipe turned out. If you want a richer flavor, have the supplies on hand, and aren’t serving anyone vegan or vegetarian, you have options. You can replace the olive oil with either duck fat or bacon fat. Each of these will add its own distinct flavor to the final potatoes, so experiment! You’ll quickly figure out which you prefer. I recommend increasing the cumin and chili powder a bit to balance the strong flavors from the duck or bacon fat.

I like to serve these with a super-simple spicy mayo. (Honestly, when I’m at home in my own kitchen, I would make my own spicy garlicky aioli. But quarantine times call for shortcuts!) I made the sauce shown by mixing peri peri sauce with mayonnaise until it was appropriately spicy. Feel free to use any other hot sauce mixed with mayo to taste! And to really kick it up a notch, stir in some very finely minced raw garlic. Yum! This is a fantastic way to bring even more spicy kick to the dish.

If you’re on the other end of the spectrum and want to cool things off instead of heating them up, serve these with creme fraiche or sour cream (mixed with a touch of milk if necessary to loosen it up) and thinly sliced green onions or chives. This will offer a nice cooling contrast to the spicy heat of the potatoes.

Looking for something to go with these spicy roast potatoes? Try my baked honey teriyaki salmon! 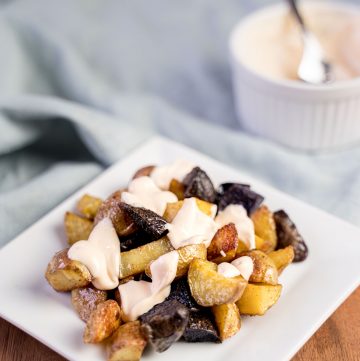 These super-simple spicy roast potatoes only take 5 ingredients and make a great side dish with a kick of heat!
Print Pin Rate
Servings: 2 people, as a side dish
Calories: 287kcal
Author: Gretchen