This rice stuffed eggplant recipe is a little more time-consuming than most of what I’ve been posting lately from our quarantine kitchen. But don’t be intimidated! Sure, it takes almost two hours, but each step is pretty straightforward and the eggplants spend most of that time in the oven.

The flavors here are inspired by the time we spent in Morocco. There, I fell in love with the complexity of flavors like saffron, cumin, and preserved lemon. But I’ve made some adjustments so this recipe will be easy to create anywhere. The only special ingredients you’ll need are saffron and sumac. Both are so delicious that I recommend you keep them in your pantry anyway! If you can’t find them, you can make the recipe without them, but give it another try once you get your hands on them.

Saffron: using saffron adds an extra layer of complexity to this dish. If you don’t have it on hand, go ahead and make these rice-stuffed eggplants anyway. They’ll still be delicious! To bring back a bit of that complexity, add a pinch of grated nutmeg or allspice. It won’t be quite the same, but it will be amazing. If you have that saffron-substitute powder or liquid that’s purely for the sake of adding color without flavor, don’t bother with it here.

Sumac: this is one of those spices that’s getting increasingly popular, but still may not be in your pantry just yet. If you don’t have it and can’t easily get it during quarantine, skip it! It adds some delicious brightness, but you’ll get plenty of that from the lemon peel and its syrup anyway.

Salt quantity: I know adding a teaspoon of salt per two eggplants feels like a lot. There are a couple things to keep in mind here. First, Himalayan salt is less salty per teaspoon than table salt (which honestly I avoid at all costs). This isn’t because it’s any different inherently, but rather that the larger flakes mean that there’s less actual salt in each teaspoon. Second, this salt is going to need to season everything. Not only the filling, but also the insides of the eggplants themselves. If you’re concerned about sodium, start with less, but this turns out not to be nearly as salty as you’d expect.

Creme fraiche or sour cream: I love creme fraiche and will almost always take it over sour cream. But if you only have sour cream on hand, absolutely feel free to use it! If you have the ingredients and a day or two before you need to cook this recipe, I really recommend making your own creme fraiche at home. It’s simple and the results are delicious!

Candied pickled lemon peels: these aren’t “pickled” in the long-term sense of the word, but rather are more like quick-pickled red onions. Except that they’re also cooked with sugar and semi-candied. The result is something you can make in under 20 minutes that evokes the flavor of preserved lemon peels. If you happen to have preserved lemons on hand, though, by all means use those instead!

Vinegar type: the candied pickled lemon peel recipe works really well with either apple cider vinegar or rice vinegar. I wouldn’t recommend using balsamic vinegar (too distinctly flavored) or white vinegar (too harsh). If you have another type in mind, give it a shot and see how it turns out!

Vegetarian or vegan options: this recipe is “coincidentally vegan” as long as you don’t include the sour cream or creme fraiche! And it’s vegetarian regardless. If you’re strictly vegan, you’ll want to make sure you’re using vegan sugar. At least in the US, lots of sugars are made with bone char.

These eggplants are hearty enough to make a meal on their own! If you want to serve them with something else, I’d recommend a shaved vegetable salad with mint yogurt dressing. The mint will play perfectly with the flavors in the eggplant!

Slice the eggplant. I cut about halfway down the depth of the eggplant in a single slit from about 1” below the top to 1” above the bottom. This leaves enough of the eggplant intact that it won’t fall apart as it roasts! Make sure you don’t cut all the way through the eggplant. There should be just a slit going down into its center; you’re not cutting it in half. Drizzling olive oil inside the cut is optional, but I like the added richness.

Roast the eggplant for the first time. You’ll know the eggplant is ready for the next steps when gently pressing on it leaves a dent. (Be careful, it’s hot! My fingers are basically immune to heat at this point, but I recommend using the back of a spoon instead so you don’t burn yourself.) The goal here is to get the eggplant soft enough to be able to scoop out the insides easily.

Make the filling. You’ll start off by cooking the onions until they’re soft. At this stage, the recipe calls for a teaspoon of Himalayan salt per two eggplants. This feels like a lot, but it needs to season everything. Once the onions are golden and the garlic is fragrant, you’ll deglaze the pan with some white wine. This means using the wine to loosen the delicious brown bits from the pan, which you can then rub off with a wooden spoon. Next, you’ll add the tomatoes and saffron, and cook for long enough that the tomato bits melt into the sauce and the saffron infuses the whole thing with its delicious flavor and fragrance.

Scoop out the eggplants. Once they’re cool enough to handle, scoop the guts out of the eggplants using a spoon. Be careful not to puncture the skin! Leave a layer of the guts on all sides to help the eggplants retain their shape. Roughly chop the innards and add them to the filling mixture along with the rice.

Stuff the eggplants. Once the filling is done, you’ll stuff it into the hollowed-out eggplant shells. (Be careful, the filling will be hot!) Use your hands if it’s not going to burn you, or a spoon if it’s still too hot. Either way, fill the eggplants thoroughly, but don’t stuff them so full that they’ll burst.

I like to nestle each rice stuffed eggplant against each other or the side of the baking sheet at this point so that they can help hold each other up during the second roast. This helps ensure that they don’t just collapse under the weight of their delicious fillings! If necessary, you can use aluminum foil under the parchment paper to wedge the eggplants together. From there, you’ll roast them again until they’re completely tender.

Make candied pickled lemon peels. If you have preserved lemons on hand, skip this step and just use those instead! But if you don’t, these make a decent approximation in much less time. They’re sweet, tangy, and a touch bitter, and the added cumin gives them some flavor complexity. When you peel the lemon, get as much pith as reasonably possible off of the peels you’ll cook, but don’t go crazy about it. It’s okay if there’s still a bit of white on them.

You’ll use some of the leftover cooking syrup to finish these eggplants, but don’t throw the rest away! It’s delicious and packed with flavor, and can go with so many things. I like to mix it with yogurt, more cumin, and some smoked paprika and chili powder for a quick sauce, or even to mix it with sparkling water for a unique and refreshing drink.

Put it all together. Once the eggplants have been roasted for the second time, it’s time to put everything together into a finished dish. Gently scoop each eggplant out onto a plate, and drizzle each with about a tablespoon of the syrup from the lemon peels. Top with creme fraiche or sour cream (optional; leave this off if you want a vegan recipe!), add some lemon peels, and sprinkle your rice stuffed eggplant with sumac. 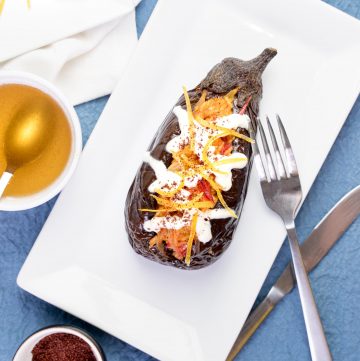