Growing up (don’t worry, this isn’t going to turn into one of those long personal essays that readers hate!), I absolutely loved potato leek soup. In hindsight, it was all about the leeks, which I really think are still vastly underappreciated. Probably there’s no such thing as appreciating them enough, because they’re so amazing, especially in uses like these melted leeks.

Leeks work well in various recipes and you can often substitute them for other alliums, like shallots or onions. In most uses, the leeks seamlessly blend into the dish, just offering some of their delicious sweetness as a backdrop.

Sometimes, though, you want a recipe that highlights the leeks themselves and lets them shine rather than playing a supporting role. And these buttery melted leeks do exactly that. The uses are almost endless. Use them in various main dishes (like my baked honey teriyaki salmon with melted leeks). Put them on top of whipped goat cheese for a simple, elegant spread. Try them on toasted multigrain bread for a simple, delicious breakfast or snack. Or, if you love leeks as much as I do, just eat them straight out of the pan! (I always make more than I need because I can’t resist eating some straight from the pan.)

The key to these melted leeks is to cook them low and slow. They take about 50 minutes once you get them in the pan, but you can safely ignore them for most of that time, just stirring them once in a while.

Notes on This Melted Leeks Recipe:

Salt level: I like to make these leeks pretty salty, so I use about 1 teaspoon of sea salt per 2 cups of sliced leeks. However, sea salt is less salty per teaspoon than typical ultra-fine table salt, so be careful not to go crazy. Start with less if you’re unsure, and add more to taste as the leeks get closer to done.

Unsalted vs. salted butter: this recipe calls for both unsalted butter and, separately, salt. I always use unsalted butter because it offers so much more control over the salt level in your finished recipe. But if you only have salted butter, that’s fine! Just don’t add any extra salt until a few minutes before the leeks are ready. At that point, you can taste the leeks and add more salt if necessary.

Washing the leeks: leeks are notoriously filthy inside. When you peel off the outer leaf, there’s a good chance you’ll see lots of mud underneath. The other layers are just as dirty. When I was making this recipe for the pictures, I even found a dead mosquito inside. Yes, seriously. The point being, when you’re washing the slices, be sure to agitate them well under running water. Break up the ringed sections so the dirt between the layers can wash out.

Butter vs. oil: for me, there’s something absolutely magical about the combination of leeks and butter. It’s one of those times where the whole is so much greater than the sum of its (already amazing) parts. With that said, you can absolutely make these vegan by using oil instead. Instead of going for a flavorless oil, opt for a mild, buttery olive oil. (Avoid any particularly bright or spicy olive oils – they’re great for other uses, but can make these leeks taste a little bit off or unpleasant.) 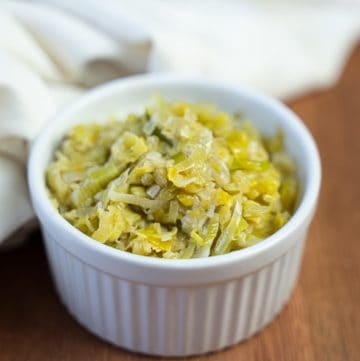 So soft they’ll melt in your mouth, these leeks are the perfect flavorful accompaniment to just about any recipe. (If you can resist eating them all on their own!)
Print Pin Rate
Course: Components
Servings: 2 portions
Calories: 228kcal
Author: Gretchen