Are you ready to do something really special with your potato side dish? If you’re bored of mashed, baked, or roasted, these confit fingerling potatoes are exactly what you need. They’re rich, decadent, flavorful, crispy, and addictive. Serve them as a side dish on their own, or drizzle with your favorite sauce! (I love them with gremolata, but they also work well with aioli, pesto, or even sour cream.)

What Does It Mean to Confit Something?

First things first: let’s talk about the culinary term “confit”! (If you’re not interested in some culinary geeking out, feel free to skip this section.)

In The Professional Chef, the Culinary Institute of America defines the term as: “Meat (usually goose, duck, or pork) cooked gently and preserved in its own fat.” The four important takeaways here are meat, preservation, gentle cooking, and fat.

This definition still carries echoes of the traditional purposes of confiting meat, which was to preserve it. Cooking meat and then storing it in its own fat was an effective way to preserve it before freezing or refrigeration was an option!

You’re probably familiar with duck confit. This particular dish sort of bridges the gap between the historical and the modern. It’s still meat gently cooked in its own fat, as it would have been in the past for preservation. But now, it’s a higher-end dish that you’ll find all over restaurants in Paris (and around the world).

In modern cuisine, the term “confit” doesn’t necessarily involve meat or preservation. Instead, it’s used as the equivalent of “poach,” but with fat instead of water-soluble liquids. So if you cook a potato in simmering (but not boiling) broth, you’re poaching it. If you cook a potato in hot (not boiling) fat, you’re confiting it. And that’s what you’ll be doing today!

Fat quantity: use as much fat (olive oil or duck fat) as it takes to cover your potatoes! The quantity depends on the size and shape of your pot or pan, so I can’t give an exact number. But it will seem absurdly excessive. Probably in the realm of several cups.

Fat type: if you’re not vegetarian and can get your hands on duck fat, use it. It’s almost indescribably decadent in this recipe, and gives the potatoes an incredible depth of flavor. Alternatively, a mild olive oil (nothing too sharp or bitter!) works fantastically too. Feel free to combine them for the best of both worlds.

Alternative uses for confit fat: you’ll have a ton of fat left over after confiting the potatoes. Don’t throw this away! Stick it in the refrigerator and use it as needed. Another option is to confit several things in the same day, using the same fat.

Halving potatoes vs. leaving them whole: a lot of fingerling potato confit recipes call for leaving the potatoes whole as you confit them, and then cutting them before you bake or fry them. And you can absolutely do this! Follow the recipe as written, but cut the potatoes in half lengthwise after you cook them instead of before.

I like to halve them before confiting them for two reasons. First, it lets more surface area (including some flesh, not just skin) to come into contact with the fat, leading to a richer result. Second, it requires less fat to cover halved potatoes than whole ones. Duck fat is already a specialty item, and decent olive oil isn’t cheap either, so I prefer not to use cups and cups more than necessary.

The advantage of leaving them whole and then cutting them later is that the cut sides will be more raw and starchy when you do it this way. That means a slightly crispier final result when you fry them. To me, they’re crispy enough already and don’t need the extra boost, but make your own decision!

Baking vs. frying potatoes: another thing you’ll see in recipes for these potatoes is the recommendation to bake them after confiting them and cutting them in half. You can definitely do that. If this is your preferred method, preheat your oven to 400 F (200 C) and roast the potatoes on a baking sheet for about 25 minutes, turning them over once halfway through.

I pan-fry them instead. Why? It’s faster and easier to control, and I like the result better. Again, though, feel free to do what you prefer! If you have a cast iron skillet, frying these potatoes is the perfect opportunity to use it.

Gremolata: these potatoes are so incredibly rich that they pair wonderfully with something bright and vibrant. My gremolata is the perfect option! It’s herbal and citrusy, with a little bite from the garlic. It perfectly highlights the richness of the potatoes by standing so firmly in contrast to them.

Confit the potatoes.: This recipe calls for cutting the potatoes in half first, but as I mentioned, you can leave them whole if you prefer. You’ll cook them on a low simmer submerged in fat for about 20 minutes or until they’re fork-tender. If you’ve cut them in half, you’ll also notice the bubbling reduce around this time, which I attribute to the potatoes losing a lot of their moisture earlier in the cooking process! You’ll then drain the potatoes. Don’t throw the fat away! Pop it in the fridge and use it whenever you need it, like for sauteing or roasting vegetables. Finally, sprinkle the halved potatoes generously with salt. It’s important to do this right away so the salt will stick.

Fry the potatoes. In a preheated pan, ideally a cast iron skillet, fry the potatoes cut-side down on medium-high heat. Cook them until they’re your preferred shade of golden brown! For me, this usually takes about 5 minutes, but you may prefer them lighter or darker. You’ll then flip the potatoes over and continue frying them on their backs to get some color on that side too. Once they’re done, serve them immediately as a side dish either on their own or with a sauce of your choice.

Take Your Fingerling Potato Confit to the Next Level:

Make garlic confit first. I mentioned before that one way to use all the extra fat is to confit several things in one day. One of my absolute favorite recipes is garlic confit, which also infuses the fat you’re using with incredible garlic flavor. Make these potatoes extra special by cooking garlic confit first, and then confiting the potatoes in the garlicky oil!

Looking for something to go with this fingerling potato confit recipe? Try my gremolata! 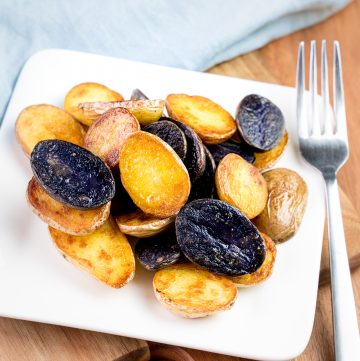 Rich and decadent, these potatoes are so much more than just another starchy side dish. Make a few extras in case you can’t resist snacking on them before they make it to the dinner plate!
Print Pin Rate
Prep Time: 5 minutes
Cook Time: 35 minutes
Total Time: 40 minutes
Servings: 2 as a side dish
Calories: 400kcal
Author: Gretchen