If you’re ever in Santiago, please do yourself an amazing favor and take the food and market tour from Larisa. She an incredible guide who managed to introduce us to new flavors and foods even after we had spent a month in Santiago. She also provided the traditional sopaipillas recipe (and pebre recipe) that I used as a foundation to play around with when creating this one!

When we were in Santiago for the first time, I fell in love with the Chilean pumpkin sopaipillas by coincidence; we were walking through a park on a cold, windy evening and I couldn’t resist the warmth of freshly fried street food. To be honest, I wasn’t expecting much of the oddly orange fried dough (at the time, I had no idea what it was!), but it turned out to be delicious.

On our return trip to Chile, learning a sopaipillas recipe was one of my priorities. (Of course, we had to eat as many as possible, too!)

Traditionally, Chilean sopaipillas’ main ingredients are just flour and pumpkin. (We learned that the orange color of many sopaipillas now comes from dye, but traditionally—and in this recipe—it’s from pumpkin.) Of course I can’t leave anything alone, and I decided to stuff mine with gooey, melty cheese.

For a more traditional sopaipilla experience, don’t roll the sopaipillas as thin, and just fry the entire circle.

Toppings include various sweet, spicy, and/or savory options, so feel free to experiment! For these sopaipillas, I made something resembling Chilean pebre. My recipe is below, but honestly these go well with almost any sauce you can think of. (Next time, I’ll make them with a creamy garlic confit sauce!)

While boiling or steaming the pumpkin seems to be the more traditional method of cooking it, I prefer to roast it to bring out more of its sweet flavors. My recipe then adds some of that lost water back in later. If you boil your pumpkin instead, you may find you need to adjust the water or flour quantities to make up for the wetter pumpkin. 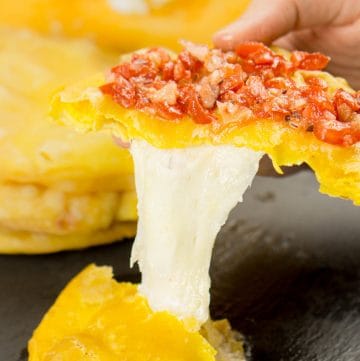 Preheat the oven and roast the pumpkin:

Roll out the dough, cut it, and stuff the sopaipillas:

If you want to make traditional unstuffed sopaipillas, there are a few important differences:

Remember that you can serve these sopaipillas with just about any sauce you can imagine! The one I made for this batch is below in case you want to give it a try. 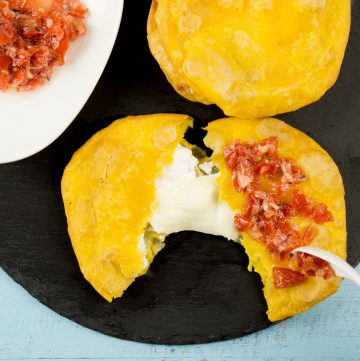