The result works perfectly with salmon. The teriyaki sauce is bold, bright, and deeply flavorful. It emphasizes the sweetness of the salmon and leeks, while being tangy enough that the dish doesn’t end up being too sweet. The sesame oil also brings out the richness of the salmon’s flavor. And the beautiful bronzed glistening look of the finished salmon is just a bonus!

Melted leeks are something I’ve loved for years, because they’re so versatile and go well with almost anything. I have a post all about those too, also with more detail and some options! Check it out if you want to learn more about melted leeks! If you’re in a hurry, just proceed with this salmon recipe (which includes the abridged version).

Notes on This Teriyaki Salmon Recipe:

Melted leeks: the melted leeks in this recipe are optional, but amazing. If you don’t want to include them, you can just skip the steps involving leeks and go straight from preheating the oven to making the honey teriyaki sauce.

Substituting for leeks: if you like the idea of leeks but don’t have them on hand, the best close substitute would be caramelized onions. However, since caramelized onions are so much sweeter than melted leeks, you’ll need far fewer of them. Also, I wouldn’t recommend using them as a bed for the salmon the way you can with the melted leeks. Instead, I would arrange them on top of the salmon as you’re serving it.

Salmon baking time and temperature: the Kitchn has a fantastic guide to baking salmon in the oven. They recommend 4 to 6 minutes of bake time per ½ inch thickness (top to bottom; not width) of your salmon pieces at 425 Fahrenheit (220 Celsius). I prefer baking the salmon at 400 Fahrenheit (200 Celsius) for 5 to 6 minutes per ½ inch of thickness. This means a 1” thick piece of salmon will be done in 10 to 12 minutes. A 1 ½” piece will take 15 to 18 minutes. Ours pictured here were just over 1 ½” and took exactly 18 minutes.

Teriyaki sauce quantity: this recipe makes more honey teriyaki sauce than you’ll actually need for the salmon. It’s hard to make it in smaller quantities, though, because it just burns off too quickly. Keep the extra sauce for another use, like a stir-fry or a baked chicken teriyaki meal.

This baked honey teriyaki salmon pairs perfectly with my super-simple spicy roast potatoes. They’re quick to make, and bake at the same temperature as the salmon. If you want to make those to go with your salmon, start them first (since they need to bake longer). Calculate the bake time for your salmon, then put it in when the potatoes are approximately that close to done. For example, if your salmon should take around 15 minutes, put it in the oven about 15 minutes before your potatoes are due to come out. This way, everything will be hot and ready at the same time. 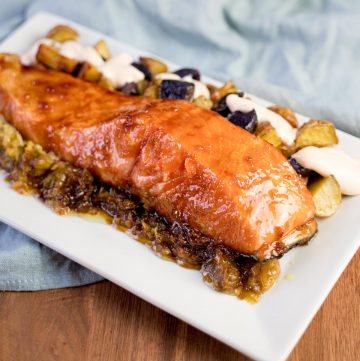 Tender salmon, glistening honey teriyaki sauce, sweet and salty melted leeks… no one will believe you threw this together in under an hour with just a handful of staple ingredients!
Print Pin Rate
Servings: 2 people
Calories: 871kcal
Author: Gretchen

Want to remember this baked teriyaki salmon recipe for later? Save it to your favorite Pinterest board!