If you hadn’t figured it out from the site’s logo, I love figs. Back home in California, I have a couple of “secret” fig trees where I can go pick them fresh when they’re in season. (Sadly, the biggest and best of these burned down in one of California’s major wildfires a couple years ago.)

Here in Berlin, where we’re spending a few months, it’s been hard to find some of the produce that I’m used to back home. It’s been impossible to find fresh oregano or thyme, for example, or even butternut squash. Luckily, the gorgeous figs make up for it. They’re big, juicy, and often sold in their own little cupcake-wrapper-like holders, making them feel even more precious.

On this pizza, the sweetness of the late summer figs is brightened by the lemon-infused olive oil (or agrumato, if you have it). The fennel root is a bridge between the two, with the ricotta mellowing everything out a bit. Finally, the radicchio adds a much-needed kick of bitterness, and keeps the pizza from being too sweet and delicate. 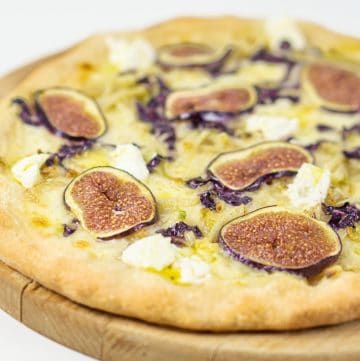 Preheat the oven and prepare the toppings:

Cook the fennel and dress the radicchio:

Cook the pizza and make the lemon-infused olive oil: