If you’re familiar with this site, you know that “authenticity” isn’t really my thing. Almost all of the recipes I share are my playful take on flavors, or reinterpretations of world dishes and ingredients. You also know that I try to stick to food rather than the much-hated pointlessly long intro stories that food bloggers love. (To be fair: Google makes us do it!)

This potato recipe is an exception to both.

Our arrival in India was miserable. In our first few days, we experienced the longest wait we’ve ever had at an immigration line, a filthy hotel room full of mosquitos, an unwanted 4:30 AM personal wake-up service (after three hours of sleep), being dramatically overcharged for a taxi (with no real choice except to pay), and an apartment with an exploding toaster and so much black mold that I was sneezing blood.

We were exhausted, miserable, sick from the mold, and discouraged. This was one of the points where we almost, almost gave up. We decided to rent another place for a couple of nights while we figured out our plans (run away to Europe? Run ALL the way away to home in California?)

The disaster and misery turned out to be for the best. The host at our temporary apartment took us under his wing with the most incredible hospitality we’ve received anywhere. His warmth was the single reason we decided to stay in Kolkata for the entire time we had planned, and we ended up spending nearly a month living in his apartment. In fact, we enjoyed it so much that we’re squeezing in a week-long visit between Thailand and Croatia next year.

Many nights, he would deliver us homemade meals cooked by his sweet, lovely, and multitalented sister, Rupa. I’m not exaggerating when I say that her food is better than the Indian food we’ve had anywhere else (in India or abroad), and I’d rather eat at Rupa’s table than at many of the fine-dining restaurants we’ve been to (I’ll resist the temptation to name names). She was generous enough to teach me how to make a few of her recipes, and this one is my favorite. 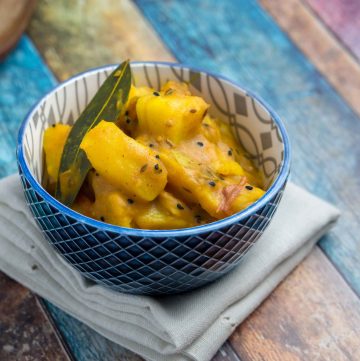