Three years ago today, Gustavo and I became official. We had met on OKCupid in early December, but he was in Texas and I was in the San Francisco Bay Area, so naturally it took a while to coordinate the logistics. Just over three years ago, I embarked on the very, very long drive to Lubbock, against all common sense. Fortunately he wasn’t an ax murderer, and we’ve been together ever since. It’s amazing how much has happened and how many places we’ve been in just a few years… but I digress.

Not long after we started chatting, Gustavo admitted to me that he hated vegetables and his usual dinner consisted of either chicken or steak with either rice or pasta. Naturally, I was horrified. When we met in person a few weeks later, I cooked him these eggplant stacks.

In hindsight, he claims that was the moment that he was stuck with me, because if I could make him like vegetables, I was a keeper.

The trick, as with pizzas, is to make each component taste good on its own. If you wouldn’t happily sneak bite after bite of garlic mushrooms with goat cheese, or caramelized onions, or spicy San Marzano tomato sauce, then substitute things you prefer! I personally love this combination, with the earthy mushrooms, sweet onions, bright goat cheese, and spicy sauce all supported by the eggplant, but absolutely feel free to play with it and make it your own. 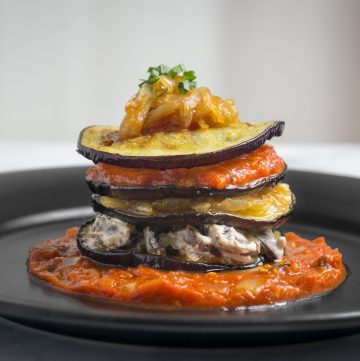 Roast the eggplant with garlic oil:

Sauté the mushrooms with garlic and goat cheese: