Happy New Year!! I’m not much of a drinker, but in honor of today, it only seems right to share a celebratory cocktail recipe!

It’s funny—despite having spent the last few years with Gustavo (who’s Brazilian), I only learned about Brazil’s national drink last year in Berlin from a German friend. Surprisingly, the caipirina (or “caipi” if you’re German) is really popular in Berlin. Maybe it shouldn’t be a surprise, though, considering how delicious this drink is!

Once I fell in love with caipirinhas, Gustavo revealed that his dad is renowned for making the best caipis around. Of course I took advantage of the six weeks we spent with Gustavo’s parents in Brazil a few months later to learn exactly how his dad makes his famous caipirinhas (which really are the best around).

Here’s the recipe. It’s super simple, but tastes amazing. The key is in adding enough sugar; otherwise, the cachaça is just overpowering. 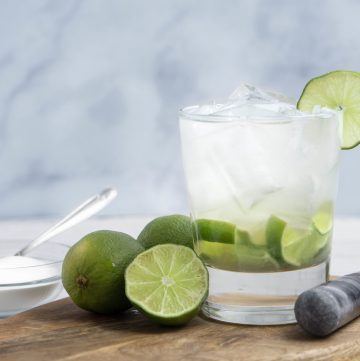